Because what is audio without video? What is video without audio?

Ever since the first crazy protohuman said “Hold my rock a sec, I’m gonna try something,” we have been entertained by images and sound.

Hellbender Media does its best to honor that ancient tradition by presenting audio-visual entertainments of all sorts and flavors. From short weird movies, to feature films, to series, and to things… of a more unusual nature… we’ve never backed down from a challenge.

Hold my rock a sec…

Hellbender Media is pleased to offer a variety of strange feature films, to complement our collection of strange short movies.

The Dream-Quest of Unknown Kadath 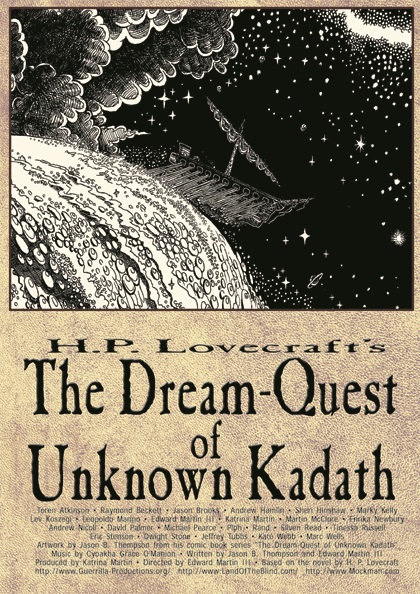 H. P. Lovecraft’s epic tale of the courageous dreamer Randolph Carter and his search for the mystical sunset city by petitioning the gods of Kadath. During his journey, he travels deep into the world of dream, to the edge of the world, to the moon and back, and to the heights and depths of human and… inhuman experience.

Flesh of my Flesh

The Dead is about how we affect others. It’s about all the little and big changes that we make in the lives around us, sometimes through deliberate action, sometimes just by being ourselves.

This is what remains. Not a body, or a will or a bit of dirt, but lives that have been changed and altered.

Without Form, and Void

You may have thought you’ve seen the ultimate in profound religious programming, but Without Form, and Void brings you before the Creation, and reveals everything that leads up to the most significant event in the history of the Universe itself.

And more than that: Without Form, and Void‘s shocking — and painfully true — ending will remain with you for as long as you live.

In the middle of nowhere, in the deep snowy wastes, a woman awakes with nothing. No tools, no clothes, no memory.

Desperate for answers, she struggles to find a way out of this hellish place, and to find her own meaning in the wilderness.

What lies beyond this fog? Beasts, redemption, annihilation? The only way to know for sure is to step through – but no one ever returns.

Hellbender Media is in production on a number of exciting series projects of all sorts and sizes.

Something dark and mysterious lies beneath the streets of Portland — something that has been quiet for year. Perhaps decades.

But now it’s waking up.

Not everyone’s going to survive the Zombie Apocalypse.

For those of us who do, meet Highmile.

Highmile knows how to wander unscathed in the land of the undead.

Surviving the Zombie Apocalypse — for Zombies!

Not everyone’s going to survive the Zombie Apocalypse.

But for those of us who don’t, there’s still a chance to thrive.

Just because murder and mayhem are part of a family’s day-to-day routine doesn’t mean that that certain rules shouldn’t be followed.

After all, what are the neighbors to think?

Meet the most polite murdery people around.

A web series for divers!

Scuba Dooba Doo is the only web series (that we know of) which is filmed entirely underwater.

Writers, filmmakers, composers, actors, and artists all struggle with the same questions.

The oldest vampire in the New World lives in New Orleans.

And he has a few things to teach us.

A thriving mining town uncovers something profoundly unwholesome in this mysterious tale of the Old West.

What could any of us expect would happen?

At the turn of the century, a group of pirates meet to swap tales and plan plunder.

But one is hungrier than the others…

…and he has a story to tell.

What could cause a human being to thrown in with a Deep One.

It better be an amazing promise!

(spoiler alert: it is)

When darkness falls and the Moon comes out, a transformation occurs — followed by fury, death, pain, and ultimately regret.

A tale of ultimate tragedy, and…

When the Greater Gods of the Lovecraft mythos get together, what horrifying mischief can they be up to?

Created as part of the Lovecraft Under the Gun competition.

A woman from Innsmouth is desperate to escape the curse of her family.

But curses are tenacious things, and avoiding them sometimes just makes it worse.

Lord of the Rings 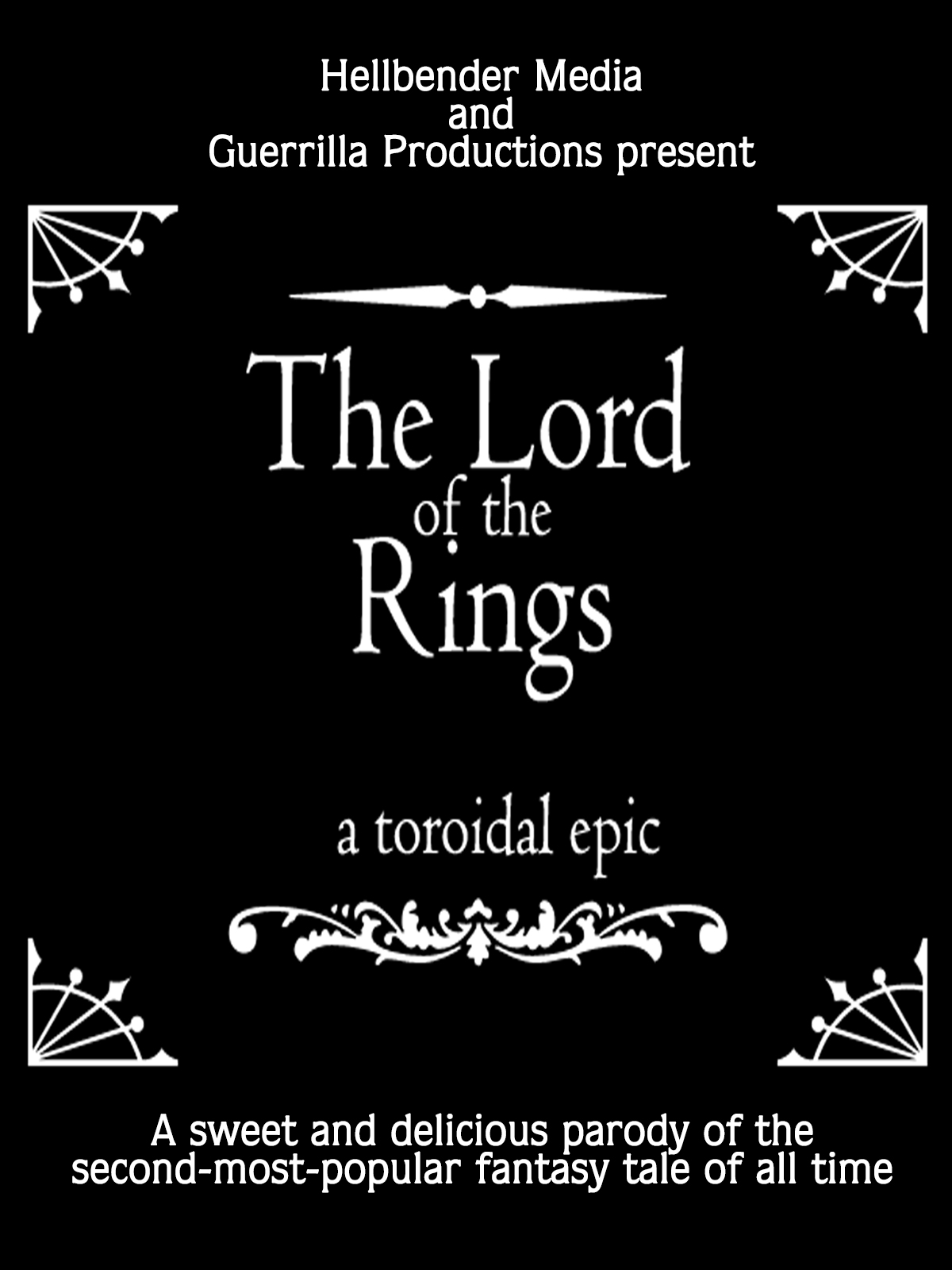 A delicious adaptation, this completely unlicensed parody covers every single chapter of the second most famous fantasy trilogy ever written.

Ages ago, our planet spun around the Sun alone, without a Moon, and upon its face there thrived a crystal race, who loved their god, and whose god loved them.

But then an intruder came…

In ReCreation, one man is forced by tragedy to confront the Universe and bend it to his will.

Sometimes in those exact forges we shine the most.

But whether or not we shine — will we survive?

Be careful about who you trust regarding your remains…

Even nowadays, when I run across these “we’ll freeze your head” people, I get nervous.

What’s it like to experience the H. P. Lovecraft Film Festival in person?

Deep in the dreary impenetrable badlands of 2415’s Pacific Northwest, a lone adventurer seeks her future.

But when she finds her future, she discovers that her past has a way of catching up, too.

The Call of Cthulhu

Before there were classy adaptations of this short story, we came along and caused mischief.

Love is a close sibling to a completely different kind of emotion.

A lesson for us all.

And philosophically, we are probably on pretty safe ground, here.

A farmer’s pumpkin patch wins all the awards, but what is his secret?

Join us on set and find out if it worked!

The Statement of Randolph Carter

The Statement of Randolph Carter is an incursion into ancient terror in the middle of a lost cemetery deep within impenetrable woods.

Two men, who thought they knew each other…

Some things are hidden for a reason.

The Testament of Tom Jacoby

What happens when six men are trapped beneath a mountain in a massive cave-in?

What if one of them…

Whenever you make a deal with a supernatural creature – no matter how good the sex is – read the fine print!

As part of our popular filmmaking workshop, Hellbender Media/Guerrilla Productions has produced many hilarious short movies.

This time, Mr. Bauer must uncover a deadly plot to… alter people…

…with mysterious fluids, and…

It’s time for journalists to get back to their roots…

Blood in the Halls

Above all else, be safe out there, fandom!

Even the weird ones.

Especially the weird ones.

But don’t go too deep…

…because when you come back…

…things may not be what they seem.

Con of the Dead

Zombies were people, too.

And still may be.

Is it murder most foul, or something even more sinister…?

Cult of the Giant Brain

Now is the time of your destruction, Earthling!

…and how deadly they may be.

Excerpt to try ’em out.

Our first workshop film, wherein we attempt to take over the world.

But he’s a very clever rat, in his defense.

It Came from the Elevator!

The horror that is locked inside that little tiny box…

(not talking about gas, BTW)

(we did it before Shayamalan!)

Even demons need your support.

Or rather, they need you to suffer so that they can earn their horns…

…which is very supportive of you.

All the news that fits!

Some news that doesn’t…

…but we crammed it in there anyway.

The Last Con on Earth

It started in the ancient days…

A cautionary tale from the far far future.

ManSlugs!: the making of “A Sci-Fi Original”

How do those movies get made?

Let’s start with the script…

…and go downhill from there.

A rare species that we must all watch out for.

And steer clear of.

Neo may be The One, but there may also be some others…

We all speak of the Unnameable, but does that really mean it’s…

Or have we just not figured it out yet?

The mashup we all needed to see:

Lord of the Rings plus Run Lola Run.

Steve: portrait of a minion

Or at least minions.

But really, don’t we all need the occasional minion?

As we all say once we hear the foundations creaking:

Too late to run!

A parody of the popular sci-fi series.

And a plot-twist to die for.

Even the lesser demons need a little time out on occasion.

Trouble is, who messes with demons in their own element…?

…Someone even more mischievous.

A double-feature of hilarious proportions.

More about low-budget filmmaking than you could have imagined! This remarkable source represents decades of experience

The Low-Budget Filmmaking Tips is your ultimate guide to low-budget filmmaking!

As a special premium to our Patreon subscribers, Hellbender Media hosts a little Streaming Theater, featuring many of our movies. If you want free access to the entire theater, then please join us at Hellbender Media’s Patreon page!

Don’t think. Thinking is the enemy of creativity. It’s self-conscious, and anything self-conscious is lousy. You can’t try to do things. You simply must do things.~Ray Bradbury