Terror from on high!

You could say that we hadn’t done a disaster film before, but I could argue that we’ve done them a grillion times.

But a genuine Irwin Allen type disaster film, filled with thrills and dangers and heroics and mayhem? Nope!

So it was time.

The Towering ConFerno is everything a good disaster should be: a chain of seemingly innocent events touched off by one single misstep, and snowballing into a genuine disaster.

A hotel — having been overbooked already — teeters dangerously on the edge. Rooms are already overcrowded and overbooked. It’s a powderkeg! And then one single decision — to divide by zero — tips the scales. Literally tips the scales. Did you see what I did there?

The building can’t handle the stress and like any good building, or cruise ship, or fault line in the California desert, everything goes crazy.

The walls start cracking, the floors start tilting, and the building itself begins to sway. Even worse — dividing by zero leads to “an infinite number of catastrophes”! Yes, that’s right — if it can happen, it will! 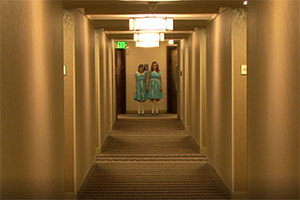 Our Hero leads a desperate group of survivors into the stairwells, but their journey is a cascade of bizarre encounters, including blizzard-like conditions, gas, snakes (which sound suspiciously like gas), Something Dangerous That Eats People And Throws Up Body Parts, flaming elevators, opposing groups who try to convince them to abandon hope, tornadoes, poltergeists, and even two little girls at the end of a hotel hallway who just want to play.

Attrition takes care of the rest, and no one is really even sure how that happens!

Finally, they escape the building, and as long as they can avoid running in exactly the same direction the building is dropping…

I always wrote. I wrote from when I was 12. That was therapeutic for me in those days. I wrote things to get them out of feeling them, and onto paper. So writing in a way saved me, kept me company. I did the traditional thing with falling in love with words, reading books and underlining lines I liked and words I didn’t know.~Carrie Fisher