Even demons need to cut loose…

It’s 2013 and we’re back at Crypticon, the largest horror convention in the Pacific Northwest, for a third go of the Let’s Make a Movie! workshop.

For reasons as yet unclear to us, the news didn’t get out about the workshop (or maybe we were always scheduled against Nicholas Brendan), but it was a tricky go from the beginning. We never quite seemed to achieve the critical mass needed to easily slip into ideas and action. A few ideas that seemed promising came and went (one rather clever one depended on good weather, but as it turned out, we had no good weather this weekend), but finally, at the last minute, something grew that we could massage into a story!

Everyone knows about the major demons and devils, but few people are aware that there are a whole slew of minor demons, second-rate demons, if you will. The Demon of Forgetting What You Were About To Say, or the Demon of Hangnails, for example. These demons occasionally need to party hard and get a little love from Head Office, so Satan sets up a special weekend convention for them in Hell.

Unbeknownst to our demons, however, there’s someone crashing the event with ulterior and mischievous motives… 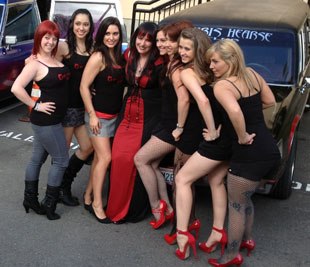 Special thanks to the Gravestone Girls of Gravestone Entertainment for taking time out of their own schedule to join us as cast for Weekend at Hellcon. They were fantastic and willing to jump right into whatever characters we needed.

If I were ever stranded on a desert island there would be three things I’d need: food, shelter, and a grip.~George C. Scott